From Kareena Kapoor Khan teasing with the latest picture of her second son to Salman Khan ditching a paycheque for Shah Rukh Khan’s ‘Pathan’, Kartik Aaryan exiting ‘Dostana 2’ and Rhea Chakraborty flying out of town, here are all the biggest newsmakers of the day by Bolly Buzz-the unusual mix of gossip and news. 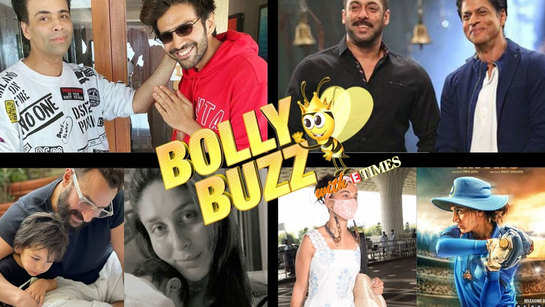 Kareena Kapoor Khan almost revealed a photo of her second son. She gave a glimpse of her breathtaking view that featured hubby Saif Ali Khan and their son Taimur Ali Khan playing with the newborn son. Bebo further hid baby Pataudi’s face with a baby emoticon and captioned it, “This is what my weekend looks like… how about you guys? ❤️”.

Reportedly Salman Khan has refused a paycheque for his cameo in Shah Rukh Khan starrer ‘Pathan’. According to the sources, Salman refused to take money for his 10 days of work when the film’s producers went over to the superstar’s office to discuss the remuneration. The Bhaijaan of Bollywood has reportedly cited that since SRK is like a brother to him, he would like to keep money away from this matter.

ETimes learned that Kartik Aaryan has exited the hugely anticipated ‘Dostana 2’ co-starring Janhvi Kapoor and Lakshya. Reportedly the hunk expressed creative differences over the film’s script. Added to this, his talent agency has not been giving dates for the film and hence the decision to replace him came into place. Soon after this, netizens began to trend #KartikAaryan on Twitter after the update went viral.

Talking about Ranveer Singh’s ‘Anniyan’, Ravichandran of Aascar Film P Ltd, sent a legal notice to director Shankar claiming he had no rights for the film’s remake. Responding to these claims, Shankar hit back with an official statement that read, “Everyone associated with the movie was aware that the script and storyline belong exclusively to me and, in fact, the movie was released with the tag: Story, Screenplay and Direction by Shankar. I have not assigned in writing any script or screenplay to any person, and continue to retain the right to exploit the script in any manner I deem fit.”

Taapsee Pannu and the film team of ‘Shabaash Mithu’ seem to have decided to take the shoot out of town. Exclusively sources told ETimes that the team was supposed to start the Mithali Raj biopic in Mumbai but has now decided to move the shoot to Hyderabad along with the cast and crew. While a lot of TV shows are shifting base from Mumbai to ensure that they churn out fresh episodes, ‘Shabaash Mithu’ becomes the first film that might change its venue.

Paparazzi caught Rhea Chakraborty at the Mumbai airport today as she flew out of the city to an undisclosed location. Keeping her attire simple and traditional, Rhea seemed to be in a happy mood as she waved to the cameras before heading into the airport.

Voice over by : Shirley Thachil