From Salman Khan‘s ‘Bhaijaan’ booking a Diwali release to Jacqueline Fernandez going house hunting with her beau, Alia Bhatt cashing in the big bucks for RRR and more, here are the biggest headlines of the day by the latest edition of Bolly Buzz.

Salman Khan is pre-booking release dates for his upcoming films. The actor’s next film ‘Kabhi Eid Kabhi Diwali’ with Pooja Hegde that has tentatively been renamed as ‘Bhaijaan’ is now eyeing a Diwali 2022 release. Reportedly, once the situation improves, director Farhad Samji will do a photoshoot with the cast at Salman’s Panvel farmhouse. After rocking stubble and moustache, Salman will now be seen sporting a clean-shaven look for this film.

Alia Bhatt’s paycheque has become the latest point of discussion with reports suggesting that she came along with a Rs 6 crore fee for her role in the SS Rajamouli film. It has now created waves in the south industry, considering that not a single leading lady in Tollywood gets the same remuneration for playing the female lead.

Jacqueline Fernandez has secretly been in a relationship with her entrepreneur boyfriend and is now ready to move in with him. According to sources, the actress has been hunting for the perfect house to move into with her mystery man who intends to move base from down South to Mumbai. She reportedly finalised a gorgeous sea-facing bungalow in Juhu, and the two plan to move in soon.

Meanwhile, the Bombay High Court dismissed the anticipatory bail plea of alleged drug peddler Sahil Shah in connection with the drug case related to Sushant Singh Rajput’s death case. Sahil has been absconding in the drugs case that the NCB has been investigating since last year after SSR’s death. “Shah is the prime suspect in the case. He used to supply drugs to Sushant,” NCB zonal director Sameer Wankhede told ETimes in a statement.

The veteran actor turned politician, Mithun Chakraborty was virtually questioned by the Maniktala police with regards to an FIR filed against him. Priyabrata Roy, who is in charge of the Maniktala police station, confirmed the news, saying, “There was a case registered against him in Maniktala and it was about a statement he made in a rally that caused some post-poll violence.” The complainant claimed that Mithun used some strong language that translated to “I’ll hit you here and you will fall dead in the crematorium.” 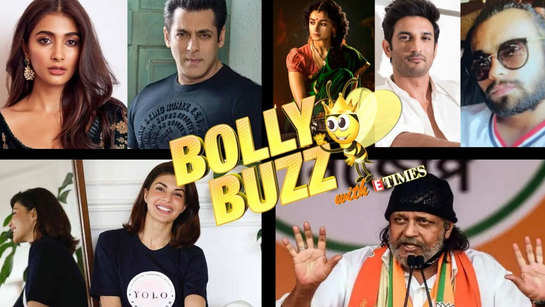