While cricket lovers across the country are busy watching the ongoing T20 extravaganza, Shahid Kapoor is no exception as we all know the Bollywood actor is an ardent cricket fan. In fact, his next film ‘Jersey’ sees him as a cricket player. However, it seems Shahid’s wife Mira Rajput Kapoor has her own way of spending time, thanks to a fan club. Mira took to her Instagram story and shared an interesting photo collage shared by a fan.

In the photo, you can see Meera in outfits matching the jersey of the teams competing at the popular T20 tournament. Check out the picture here: 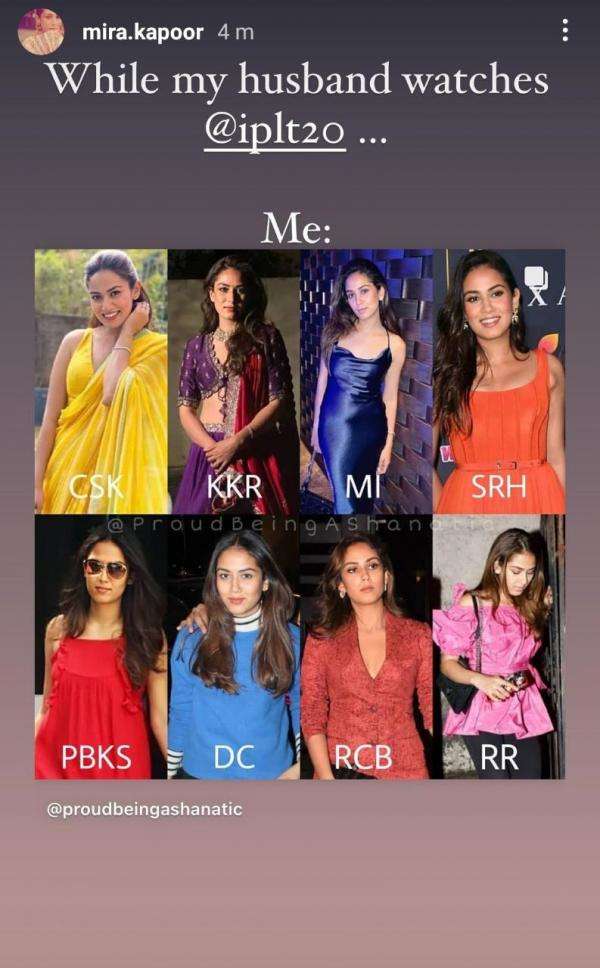 Whether it’s trolling her husband Shahid Kapoor, or putting her kids Misha and Zain up to amusing tasks, or simply poking fun at herself with comical memes, Mira Rajput is her sassy best on social media.

Shahid Kapoor and Mira Rajput are blessed to be the proud parents to two munchkins Misha and Zain Kapoor. They never miss a chance to put a smile on our faces sharing cute photos and videos of their kids on social media

Meanwhile, On the work front, fans are eagerly waiting to see Shahid back on the silver screen as his last film ‘Kabir Singh’ turned out to be a massive hit at the box office. He recently wrapped up the shooting of his upcoming sports drama ‘Jersey’ alongside co-stars Mrunal Thakur and Pankaj Kapur in pivotal roles. The film is set to release on November 5 this year.