kangana Bollywood actress Kangana Ranaut took to her Instagram handle to react to the recent arrest of Shilpa Shetty’s husband and businessman Raj Kundra in a pornography-related case as he was produced before the Esplanade Court on Tuesday afternoon.

Sharing a news report on Raj’s arrest, Kangana took a dig at the film industry and wrote, “This is why I call movie industry a gutter… all that glitter is not gold, I am going to expose under belly of Bullywood in my upcoming production called Tiku weds Sheru..”

She further added, “we need strong value system and conscience in the creative industry and of course a whip.” 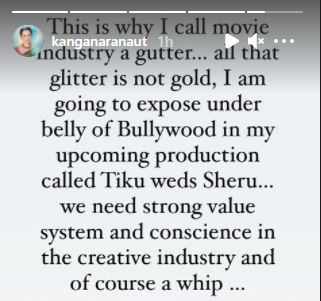 Meanwhile, Raj Kundra has been sent to judicial custody till July 23, along with Ryan Tharp, who has also been arrested in the same case on Tuesday morning.

On Monday, Raj Kundra was arrested in an alleged pornography case which was being probed since February. Raj Kundra’s name appeared in the probe after the property cell came across the involvement of a UK production company, Kenrin, whose executive, Umesh Kamat was arrested by the police. He was the former employee of Raj Kundra and was accused of uploading at least eight “pornographic and obscene” videos shot by Gehna Vasisth on a social media app for monetary consideration.

Post Raj Kundra’s arrest on Monday, Mumbai Police Commissioner, Hemant Nagrale had confirmed in a statement, “There was a case registered with Crime Branch Mumbai in February 2021 about the creation of pornographic films and publishing them through some Apps. We’ve arrested Mr Raj Kundra in this case on 19/7/21 as he appears to be the key conspirator of this.”

Tokyo Olympics: The five goals that took the Indian men’s hockey team back to the podium after 41 years | Tokyo Olympics News