Actress Katrina Kaif, who is currently busy helping the people amid these testing times, shared a lovely picture of her rumoured boyfriend and actor Vicky Kaushal on his birthday. The actor celebrated his 33
rd birthday on Sunday and social media was filled with sweet wishes from his fans and friends from the industry.

Amid the relationship rumours, Katrina also took to her Instagram story and shared a throwback picture of Vicky. He can be seen flashing his million-dollar smile while striking a pose for the camera. In the background, we can also see the Indian Army.

Katrina posted the picture with a ‘happy birthday’ GIF and penned a beautiful note for him. She wrote, “Happiest birthday @vickykaushal09. May u always be smiling.” Have a look: 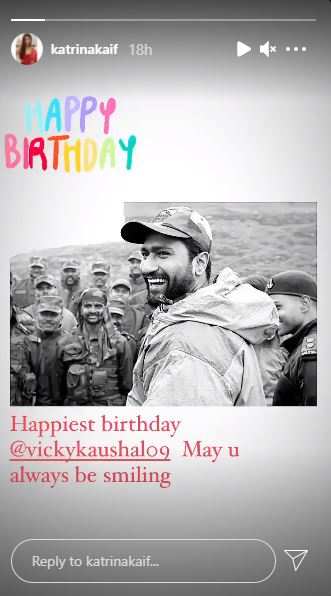 On Sunday, Vicky’s brother Sunny Kaushal gave a glimpse of his low-key birthday party. Vicky can be seen sporting a black hoodie with denim jeans and posing with the birthday cake. Sunny shared the picture on his handle and wrote, “Janamdin mubarak ho mere bhai @vickykaushal09”

Meanwhile, Katrina and Vicky have not made their relationship official yet. But their Instagram posts in the past added fuel to the fire. Katrina had once sported Vicky’s hoodie and her picture went viral on the internet in no time.