‘Radhe’ trailer starring Salman Khan and Disha Patani starrer was unveiled today and it has received a massive thumbs-up from fans. Showering love on rumoured girlfriend Disha Patani, Tiger Shroff reviewed the trailer of ‘Radhe’ and wrote, “Congrats d on the smashing trailer looking great” replying to the actor Disha wrote, “Thanks T”. 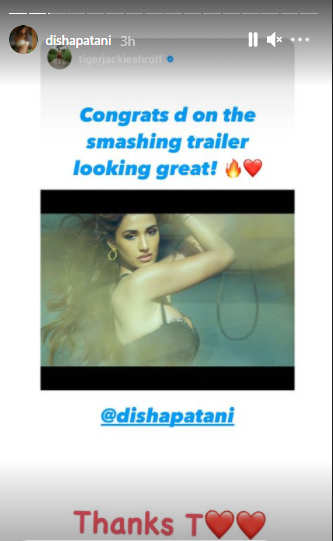 Apart from thrilling action and dramatic dialogues, the trailer of ‘Radhe: Your Most Wanted Bhai’ also featured a lip lock between Salman and Disha Patani. Fans of Salman started rejoicing as it seemed like the actor had let go of his ‘no kissing clause’ but it seems like the scene has Disha with a piece of tape covering her lips.

On Wednesday, Salman Khan had announced that ‘Radhe’ will hit the screens as well as digital platforms on May 13. Keeping his promise to fans, the actor has ensured that the film’s release coincides with EID this year. Directed by Prabhu Dheva, ‘Radhe’ stars Randeep Hooda and Jackie Shroff in pivotal roles. The film was earlier scheduled to release during Eid 2020 but was postponed due to the pandemic.