Filmmaker Shekhar Kapur had worked extensively with late Sushant Singh Rajput while they prepped for ‘Paani’, which was later shelved. Recently when a Twitter user shared that Shekhar Kapur and SSR used to talk on Twitter, the filmmaker agreed and expressed that he missed the late actor. “I miss exploring philosophy and physics with Sushant. For someone so young, his mind was incredibly agile. With amazing wisdom,” wrote Shekhar Kapur. 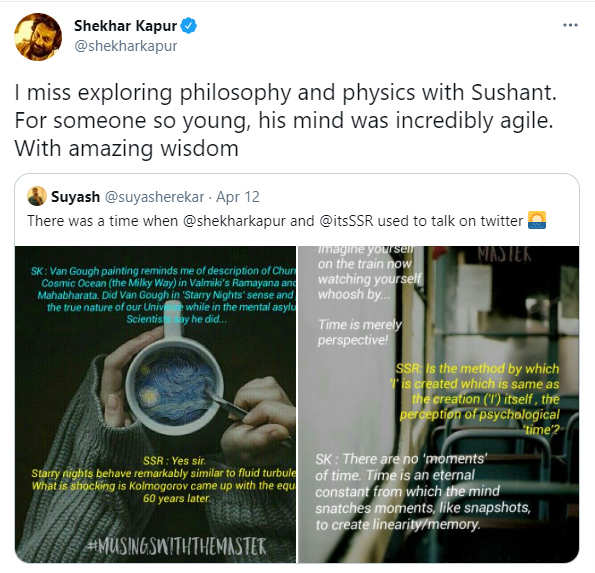 In July 2020, Shekhar Kapur had shared on Twitter that he will dedicate his ambitious project, ‘Paani’, to Sushant Singh Rajput. He had written, “If you want to journey with the Gods, or your creativity, you have to walk each step in devotion. In humility. God willing #Paani will get made one day. If it does, I will dedicate it to Sushant. But it has to be made with partners that walk in humility, not in arrogance.”

Sushant Singh Rajput passed away on June 14 at his residence in Bandra. The late actor was to play the lead role in ‘Paani’, which had been in the pipeline for several years. Sushant’s last big screen outing is ‘Chhichhore’, the Nitesh Tiwari directorial was awarded Best Film (Hindi) at the 67th National Film Awards.