Bollywood actress Sonam Kapoor who has been living away from her family in the UK, has returned to India last night after almost a year. Anil Kapoor was spotted at the Mumbai airport to receive his daughter Sonam who almost broken down to see him after a long time.

Donning a mask, Sonam waved at the paparazzi while walking out of the airport gate. She was captured greeting Anil Kapoor with a big smile and a hug after which she shared an emotional moment with him as both walked towards their car.

As it has only been a little time that Sonam is back with her family, the actress’ husband Anand Ahuja has already started missing her as he shared a picture of her on Instagram and wrote, “ @sonamkapoor miss you already!.” 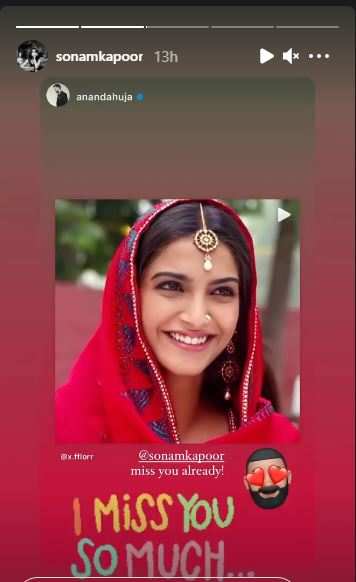 Last year, Sonam had spent her time with her close ones in Mumbai and Delhi. Later, she was seen jetting off to London during the first wave of COVID-19 in India. Ever since then she has been sharing posts on how much she missed being with her family.

On Anil Kapoor and Sunita’s wedding anniversary, this year, Sonam had penned a heartfelt note that read, “There’s not a day that goes by where I’m not blown away by how in love you two still are. Thank you for teaching me that no matter what happens in life, love and family champions everything. 37 years of marriage and 11 years of dating (48 years 🥲), and a lifetime to go. How I wish I could’ve hugged you both in person right now. Happy anniversary, Maa & Daddy. Love you! 💕✨”

On the work front, Sonam will be next seen in ‘Blind’.